Showing posts from July, 2017
Show all

“There are not more than five musical notes, yet the combinations of these five give rise to more melodies than can ever be heard.” – Sun Tzu , The Art of War An editor at lifehack.org recently asked me what topics I would choose if I could write about only 5. The question brought meaning and purpose into sharper focus. These are the topics I chose : Acceptance, Gratitude, Perseverance, Self-Love, and Hope. And this is why : Without full acceptance of present circumstances, positive change is difficult or impossible. Without gratitude to help us remember the positives, it is easy to get caught up in the negatives and lose momentum. Without perseverance, it’s easy to give in to despair at the first setback, mistaking, as T. S. Elliot put it, a single defeat for a final defeat. Without self-love, it is difficult to care enough about ourselves to persevere in the face of obstacles we encounter along the journey to self-actualization. Without hope, it’s impossible t
Post a Comment
Read more

Can you help with a little experiment? 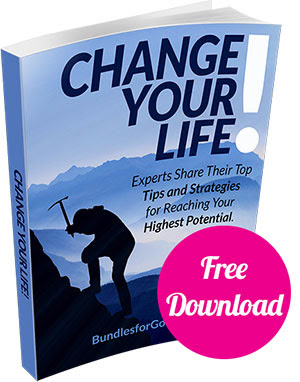 I have a small, personal favor to ask of you. So far, my attempts to get my work out into the world have had limited success, and because I have what seems to be a helpful message. I’m looking for ways to find a larger audience. I’m actually excited to be part of the Better You Bundle for Good coming in a few days. It’s a large and varied assortment of books, personal development courses, and other resources.  And for me, it’s an experiment. So, here’s the favor : Please download the free ebook   Change Your Life!  Experts Share Their Top Tips and Strategies for Reaching Your Highest Potential  This book contains nearly 100 personal development tips from a diverse group of authors and course creators,  including some of my own best advice . It’s a really interesting mix of “being-oriented” and “action-oriented” tips, and a portent of what’s to come in the  Better You Bundles for Good  package itself. Here’s the link: Download the free ebook Downloading the book will sign you up f
Post a Comment
Read more

Makeovers! (and a question)

Change Your Life! (and help refugees in Thailand)

INTRODUCING A FREE EBOOK: Change Your Life! Experts Share Their Top Tips and Strategies for Reaching Your Highest Potential   This free ebook contains personal development tips from nearly 100 authors and course creators,  including some of my own best advice. Change Your  Life!  is a part of the   Better You Bundles for Good  promotion happening at the end of July. The free ebook includes a wide range of inner-oriented “being” tips and action-oriented “doing” tips. It’s a really interesting mix and I think you’ll enjoy it.  It’s also a portent of what’s to come in the Better You Bundles for Good package itself. Click here to download the book:  Download the free ebook Better You Bundles for Good  will include the full-length courses and ebooks, worth thousands of dollars, for one low price, among them my own Paths to Wholeness: Fifty-Two Flower Mandalas . If you are serious about becoming your best self, you won’t want to miss seeing what this package offers. The  Better You B
Post a Comment
Read more

The Gratitude Cure for (Almost) Everything

Gratitude is the fairest blossom which springs from the soul. – Henry Ward Beecher During my recuperation from a brush with death, a high school friend sent me a letter. In it, he hypothesized that as a survivor of near-death, every moment for me must be exquisitely sweet, a precious gift, in ways he could not imagine. At first, he was mostly right. Despite the pain, my initial response was celebratory. But the celebration was relatively short-lived and bittersweet. As weeks became months and months became years, the glow gradually diminished. Yielding to the numerous problems that almost dying had also brought on, gratitude faded and a more troubled self re-emerged. Returning to that place of celebration has been a process. Grateful people are generally more satisfied with their lives and relationships, cope better with difficulties, and are more generous, empathetic, and self-accepting. But despite these many benefits, many of us have a hard time feeling gratitude. Often, early
Post a Comment
Read more

When Failure is an Option

Never confuse a single defeat with a final defeat. – F. Scott Fitzgerald In our success-driven culture, there seems to be no end of helpful adages for dealing with failure. But “failure is not an option” is small comfort to those who believe they have already failed, “if at first you don’t succeed, try, try again” seldom encourages the already discouraged, and “we learn more from failure than from success” is scant consolation when we don’t see a silver lining in the cloud of our defeats. The problem with these guidelines is that the underlying concept of “failure” is flawed. Most of us hope we will achieve what we strive for and believe that when we don’t, we have failed. Striving for what we want is a natural part of our makeup, but attachment to the outcome of those strivings can imprison us. For a young client whose motto was “Number 2 is the first loser,” success meant being the best at anything he tried. The pressure of being Number 1 was constant and he lived in a nightmare
Post a Comment
Read more
More posts

Phototransformations
I am a psychotherapist, photographer, digital artist, and writer living near Boston, Massachusetts. As a therapist, I work primarily with depression, anxiety, relationship issues, artists, and people with addictive behaviors. I see adults, adolescents, and children. I accept a variety of insurances and have a sliding scale for self-pay clients.

Like Carl Jung, one of the fathers of modern psychology, I believe art can be a pathway to the essential Self and foster personal and global transformation and I encourage a creative approach to treatment, and to life itself.

My award-winning Flower Mandalas were inspired by the paintings of Georgia O’Keeffe and the flower photographs of Harold Feinstein, with whom I briefly studied.

I am the author of Paths to Wholeness: Fifty-Two Flower Mandalas, two coloring books for adults, a book about American folk music, and three books about computer software.